The physical, psychological, social, musical and educational benefits of singing

There are many different benefits that arise from engaging in singing activities. These apply to all ages, from childhood into adolescence and through into retirement age and beyond. With appropriately nurturing experiences, singing competency will develop. Almost without exception, everyone has the potential to sing competently and enjoy singing across the lifespan. Childhood provides a crucial opportunity to lay the foundations of a positive lifelong singing (and musical) identity.

Get the downloadable PDF version

Within the various research literatures, there are five main areas of reported benefit from singing. Benefits are physical, psychological, social, musical and educational (and often overlapping).

The physical benefits of singing relate to:

Singing is aerobic, in that it is a form of exercise that improves the efficiency of the body’s cardiovascular system, with related benefits to overall health. Aerobic activity increases the oxygenation of the blood, which also improves overall alertness. (A study in October 2007, for example, suggested that breathing pure oxygen was more beneficial than caffeine for increasing driver alertness.) Even when seated, singing involves dynamic thoracic activity, with benefits to the underlying structure and function of the breathing mechanism. Major muscle groups are exercised in the upper body. Furthermore, aerobic activity is linked to longevity, stress reduction and general health maintenance across the lifespan. Improving airflow in the upper respiratory tract is likely to lessen opportunities for bacteria to flourish by keeping the airways open (e.g., to counter the symptoms of colds and flu). Regular singing activities also can improve lung functioning for people with respiratory illness. Overall, there are whole body physical benefits from singing (see also neurological functioning below).

2. The development of fine and gross motor control in the vocal system

The more that the vocal system is used appropriately, such as in healthy singing, the more that the underlying anatomy and physiology are likely to realise their potential in terms of growth and motor coordination. This is very important in childhood and into adolescence because it is also a time when the underlying basis for lifelong vocal identity and effective communication are established, and when healthy vocal motor behaviours can be nurtured.

Singing behaviour is multi-sited neurologically and networked across many different brain areas. These include the development and interaction between parts of the brain that are dedicated to aspects of music (such as pitch, rhythm, timbre), language (lyrics and speech), fine motor behaviour, visual imagery and emotion. Singers tend to have greater connections between areas of the brain than non-singers. Research has suggested that singing with someone else is not the same as singing alone, nor the same as singing with an instrument, because singing with others involves neurological areas related to human social interaction, empathy and coordination. There is also new evidence suggesting that singing can help develop the auditory attention and perception of hearing impaired (HI) children, including those with cochlear implants. Neurologically, there is a close, overlapping relationship between overt and imagined singing (such as silent rehearsal and singing to yourself).

The psychological benefits of singing relate to:

1. Intra-personal communication and the development of individual identity, both in music and through music

Confident and healthy voice use links to a positive self-concept and an ability to communicate. Successful singing promotes self-esteem, general confidence and also self-efficacy. The voice is a key component of who we are; its use reflects our mood and general psychological wellbeing, which is communicated to ourselves as well as to others (see also educational benefits below).

2. Singing is a cathartic activity

Singing provides an outlet for our feelings. Through its physical activity and the related internal endocrine system triggering, singing can allow us to feel better about ourselves and about the world around us. From pre-birth, our earliest auditory experiences are biased towards the human voice, principally from first hearing our mother’s voice inside the womb. All voice use, including singing, is interwoven with core emotional states that are central to the human condition, such as joy and sadness. Singing’s psychological benefits are evident in children’s everyday settings, including schools, kindergarten, homes, and hospitals, as well as for older people in residential centres, daycare centres and community choirs.

Healthy singing enables us to maximise our potential to communicate with others. We learn to improve our underlying vocal coordination, to increase vocal colour (timbre) and impact intentional variety into our vocal communication. Indeed, for 25% of the working population, voice is a critical tool-of-trade (including teachers, lawyers, clergy, telephone salespeople, actors, singers, and business people). Singing exercises the basic voice mechanism and improves its functional capability, in childhood and across the lifespan, whatever the context.

The social benefits relate to:

1. An enhanced sense of social inclusion

Successful singing ability is strongly correlated with a positive sense of social inclusion, of a feeling of belonging to our community. Singing with others enhances the possibilities of empathic relationships with those around us. Collective singing, such as in a choir, small group, or larger community gathering generates a positive group identity, as well as physical and psychological benefits. This is evidenced, for example, in a comparison of data from 6,000 children who participated in the Sing Up research evaluation; children’s higher singing competency ratings were significantly associated with an increased sense of social inclusion – a finding that was echoed subsequently in a study of children who participated in an Italian regional school choir initiative. Singing and social inclusion is also powerfully evidenced in the communal histories of the Baltic States (Estonia, Latvia, Lithuania). Their ‘singing revolution’ in the mid-1980s drew on centuries of shared symbols of national heritage. This vocal repertoire strengthened and deepened national identities that led to these countries’ subsequent non-violent independence from the former Soviet Union.

The musical benefits relate to:

1. The realisation of our musical potential

Singing activity fosters our intellectual engagement with music. This includes an understanding of musical structure, phrasing, the development of musical memory (including music’s repetition and variation) and tone colouring, as well as other musical building blocks (such as pitch, rhythm, loudness).

2. The creation of an individual musical repertoire (whether as a listener or performer or both)

There are concomitant social and personal benefits through increasing the likelihood of empathic understanding of others and ourselves by the kinds of songs (music and text) that we experience, whether alone or in groups.

The educational benefits relate to:

1. Increasing knowledge, understanding and skills about the world around us, both in music and through music

Singing will likely make you more competent in your own language, including an improvement in reading skills. Reading lyrics and reading music are processed in the same neurocortical regions for symbol decoding. In terms of enculturation and development, recent analyses of longitudinal cohort data in England and Australia (totalling over 18,000 children) indicate that early musical experience in the home at ages 2-3 years – including joint and supported singing (such as action songs, counting songs, nursery rhymes, and children’s songs) – has a measurable impact subsequently on aspects of wider development at ages 4-5 years. A higher frequency of home music activities—which are biased towards singing—contributes positively to the development of the same children’s vocabulary, numeracy, attentional and emotional regulation, behaviour and prosocial skills.

These combined benefits suggest that singing is one of the most positive forms of human activity, supporting physical, mental, emotional and social health, as well as individual development in the same areas. Successful singing is important because it builds self-confidence, promotes self-esteem, always engages the emotions, promotes social inclusion, supports social skill development, and enables young people of different ages and abilities to come together successfully to create something special in the arts.

Children’s and teachers’ singing competency develops in a nurturing environment: The evidence from Sing Up (2007-2011) 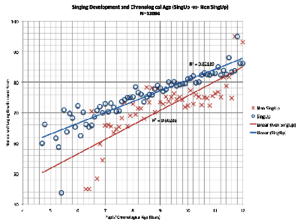 The above figure illustrates how singing competency (left-hand scale) develops with age (horizontal scale) across childhood. During the first four years of Sing Up (2007-2011), a research team from the Institute of Education, University of London (now UCL Institute of Education) assessed the individual singing abilities of n=11,258 children. Some children were assessed more than once across several years, generating 13,096 singing assessments in total. Two singing development trend lines are evidenced in the figure:

In addition, analyses of the Sing Up workforce development data suggest that providing Primary school teachers with professional development in the teaching of singing leads to increasing positive self-confidence as a vocal leader, as well as a strong appreciation of the benefits of being part of a peer support network. Evidence from England, Italy and (currently) from Australia demonstrates that increasing the knowledge, skills and understanding of the teaching of singing in Primary ‘generalist’ (non-music specialist) teachers can promote a singing culture within their schools and significantly foster children’s singing competency and development.

Written by Professor Graham Welch. Graham holds the UCL Institute of Education Established Chair of Music Education and is also chair of SEMPRE (the Society for Education, Music and Psychology Research). His team undertook a major longitudinal research evaluation of Sing Up when it was first launched. 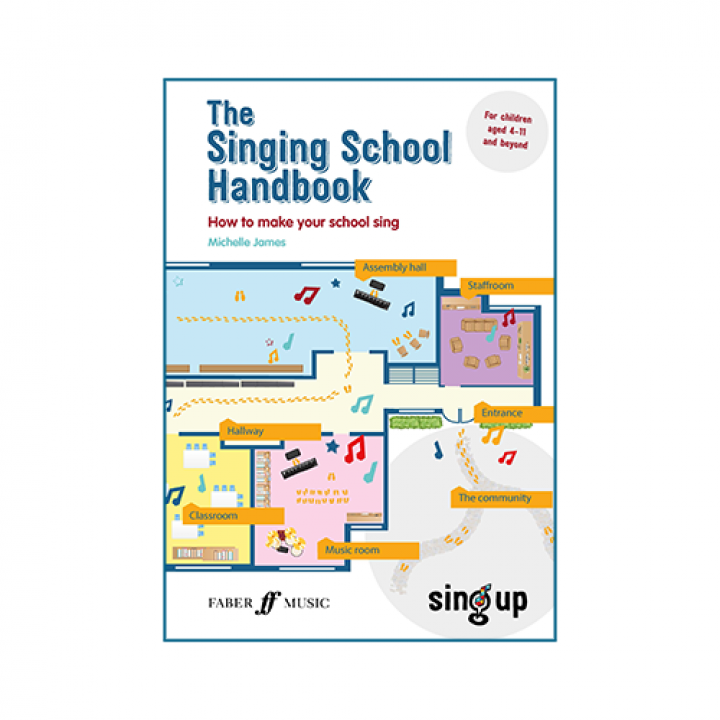 The Singing School Handbook, to be published on 7 November, is a how-to guide to help teachers and singing leaders harness the power of singing and turn their school into a Singing School.