Having conducted thousands of concerts between them, with choirs of all ages and abilities, National Youth Choirs of Great Britain conductors Ben Parry, Greg Beardsell, Esther Jones and Dominic Ellis-Peckham know that no two choirs are the same and every rehearsal is different. But follow their advice below and you’ll get great results

Whether you’re dealing with a single line melody for younger children or a complex score in multiple parts for more advanced singers, it is vital that you know the music well enough to be able to give strong leadership.

Get set before go 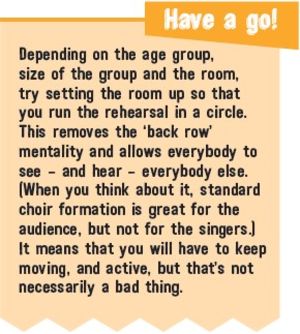 You’re conscious of time, and your instinct is to get everyone seated and singing as soon as possible. But room set up and singer warm-ups mean more than you think.

Teacher Q: How do you get people to turn up on time?

Give responsibilities out to the group. Depending on your age group, it may be chair team for getting the chairs neat, a tidy team, a music collector, section leaders.

Teacher Q: Do you have any quick engagement or focus activities? 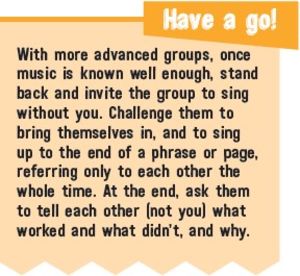 Establish ‘focus points’ at the start of the rehearsal. Tell the group to look down at the floor and say: ‘This is focus point 1’. Then at the ceiling – ‘focus 2’ – and then finally to look directly at you: ‘focus 3’. If during the rehearsal you sense that the group or parts of the group are drifting or losing focus, call out the focus points. This allows you to engage focus positively. Don’t complain: ‘Oh, I wish you would all focus.’

Have a spare chair and give it a different status at each rehearsal. It might be the ‘focus ’or ‘good expression’ chair. Reward good work by promoting individual singers to the chair through the rehearsal and encourage teamwork by inviting older singers to identify who should take the chair.

There’s nothing more boring than a rehearsal which is obviously a ‘production line’, moving through from page one to the end, fixing bar by bar and singing everything repeatedly in exactly the same way. Your singers won’t enjoy it, and you probably won’t either. So, shake things up. 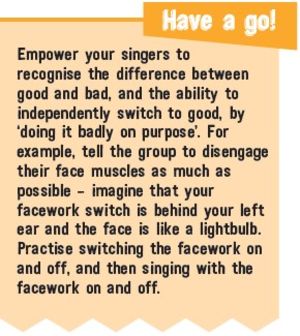 Focus is important, and so are good results. But don’t underestimate the benefits of taking your time.

A conductor’s first job is to listen, and your gestures and facial expressions will always say so much more than spoken instructions. When you do speak, avoid lists, and remember that the most important thing you can do is to reinforce what has been working well.

Teacher Q: How do you stop them from talking?

Make sure you always highlight the good examples to change the bad. Don’t tell off the group for bad posture – identify and compliment the singer who’s sitting well. Everyone wants to be complimented – they’ll follow suit.

Ben Parry: Remember the three ‘L’s: look, listen and learn
Esther Jones: Allow your singers to take risks, and support them to grow in confidence
Dominic Ellis-Peckham: You are the mirror of what you want to achieve
Greg Beardsell: Don’t listen for what you think you’ll hear – listen to what you’re hearing

Choirs
Help with using Sing Up at Home 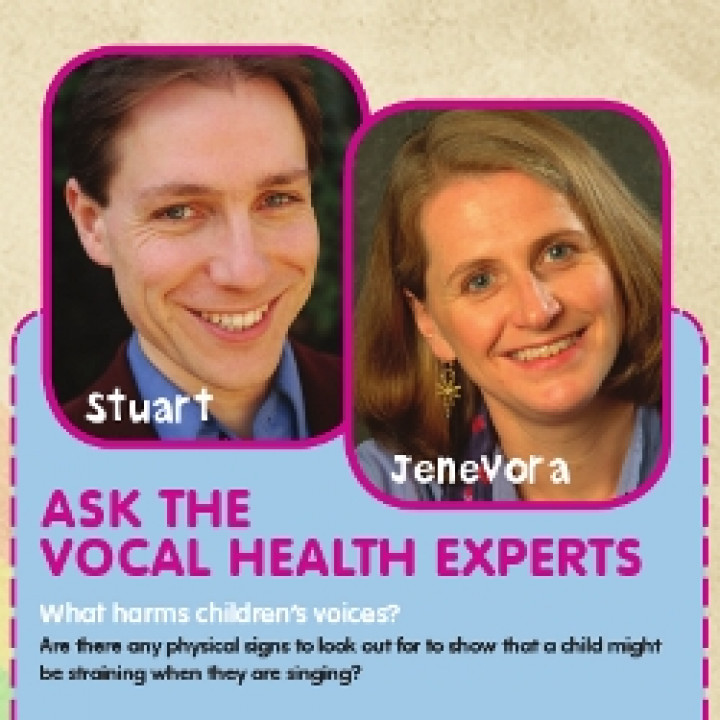